Overwrought declarations concerning the security of a nation’s people is the bread and butter of modern politics. Every potential leader of the self-proclaimed free world attempts to outdo another with over-confident pronouncements of their ability to defeat the enemy and keep us all safe. Just who “the enemy” remains to be, years and decades down the road of military engagements, is left to the practice of reinforcing memories of great emotional power. The notion of having nuanced, layered, dialogue about the variables involved in warfare and the attempt at destroying ideas with bombs is never broached. In fact, the closest we get to a conversation of this type is an almost adolescent obsession with labels.

Regardless of this lack of acknowledging the complications involved with international ideological warfare, rest assured that each potential leader will offer their variation of, quoting Obama: “Let’s kill the people who are trying to kill us.” However, the how of a war’s delivery is at least as important as exploring the why of its start and continuation. The why helps us identify the worldview and values we bring to what should be the last resort of inter-personal behavior. The how determines whether once committed we don’t lose sight of the better angels of our nature.

No form more perfectly embodies the way America does warfare than the focus on air power and drones.

From the latest gadget coming out of Silicon Valley to the ability to reach the upper reaches of our stratosphere with almost casual indifference, the power of technology is a social obsession even as it so quickly becomes banal.

“To the United States, a drone strike seems to have very little risk and very little pain. At the receiving end, it feels like war. Americans have got to understand that. If we were to use our technological capabilities carelessly—I don’t think we do, but there’s always the danger that you will—then we should not be upset when someone responds with their equivalent, which is a suicide bomb in Central Park, because that’s what they can respond with.” — Retired Gen. Stanley McChrystal in an interview with Foreign Affairs.

There is a curious and frightening aspect of human psychology that only the personal is deemed worthy of exploration, because only the personal has any emotional power attached to it. What technology provides for us is a means of distancing our potential emotional connections. We need never question what use it is being put to beyond our immediate surroundings.

“In fact, 12,000 or so strikes after Washington’s air war against ISIS in Syria and Iraq began in August 2014, we now know that intelligence estimates of its success had to be deliberately exaggerated by the military to support a conclusion that bombing and missile strikes were effective ways to do in the Islamic State.” (Tom Dispatch)

Unfortunately, our immediate environment is constrained by the extent of the questioning we bring to any situation. We have then a causal loop of insularity, with technology removing us from considerations of consequence, which then limits our ability to see beyond our own neighborhoods, our own borders.

“Even as air power keeps the U.S. military in the game, even as it shows results (terror leaders killed, weapons destroyed, oil shipments interdicted, and so on), even as it thrills politicians in Washington, that magical victory over the latest terror outfits remains elusive. That is, in part, because air power by definition never occupies ground. It can’t dig in. It can’t swim like Mao Zedong’s proverbial fish in the sea of “the people.” It can’t sustain persuasive force. Its force is always staccato and episodic.” (Tom Dispatch)

This lack of consequentialist thinking removes us from consideration of our goals. It should be shocking to hear of 12,000 drone strikes in a war that has gone on for 15 years. There are teenagers who have never known a time in America’s history where war was not a constant. Yet questions are rarely raised.

“Lethal force will not be proposed or pursued as punishment or as a substitute for prosecuting a terrorist suspect in a civilian court or a military commission. Lethal force will be used only to prevent or stop attacks against U.S. persons, and even then, only when capture is not feasible and no other reasonable alternatives exist to address the threat effectively.”

Solutions to ethical questions about the use of force are not easy and they are certainly not simple. What is equally not simple are the consequences of the continued use of force.

From Foreign Policy: “However, whenever human rights groups produce credible reports about non-American civilians who are unintentionally killed, U.S. officials and spokespersons refuse to provide any information at all, and instead refer back to official policy statements — which themselves appear to contradict how the conduct of U.S. counterterrorism operations is supposed to be practiced.”

When the form of force being used is fundamentally about providing increasing distance between the users and the place of effect, then it becomes even more imperative that we actively engage in seeking to explore those consequences. Unfortunately, as noted above, what is deemed not personal is rarely explored. Worse, what is not personal to the user may in fact be deeply personal to those suffering the effects.

From The New York Times: “The proliferating mistakes have given drones a sinister reputation in Pakistan and Yemen and have provoked a powerful anti-American backlash in the Muslim world.”

“Are our enemies any less resolutely human than we are? Like us, they’re not permanently swayed by bombing. They vow vengeance when friends, family members, associates of every sort are targeted. When American “smart” bombs obliterate wedding parties and other gatherings overseas, do we think the friends and loved ones of the dead shrug and say, “That’s war”? Here’s a hint: we didn’t.” (Tom Dispatch)

The users of technology are not different than those who have to deal with the effects. The lack of face-to-face delivery offers a physical distance that allows for moral ambiguity to grow and cognitive dissonance to not be dealt with. There are articles upon articles about online bullying and how the modern internet age of removing face-to-face interaction contributes to a lack of empathy and therefore a rise in behavior otherwise considered abhorrent and not acted upon. This process is no different in other forms of technology use, yet the consequences within warfare are generational in scope.

The Responsibility of War

“The utilization of force should carry with it the fullest attempt at matching projected action with internal value. If the action ceases to reflect or even begins to tarnish the value it seeks to support, then force and violence become less a tool of last resort and more a hammer seeking nails wherever they may be found. This connection is why it is incumbent upon the population and their representatives to do the utmost diligence in deciding when to use force. We have tasked our soldiers not merely with the protection of our national interests, but to do so at the cost of their lives and pieces of their humanity.” (Reflecting on the Armed Forces: The Other 1%)

“For a democracy committed to being a great military power, its leaders professing to believe that war can serve transcendent purposes, the allocation of responsibility for war qualifies as a matter of profound importance.” (Bacevich, 2013)

When we are no longer aware of or find ourselves much concerned with how our government conducts itself in the utilization of deadly force, this should serve as a scarlet flag waving upon our conscience. Yes, warfare seems to remain a necessary tool in the continued evolution of our fledgling civilization. No, warfare should not be dealt with heads held low and minds shut-down to consequence. We are not tasked as citizens of this world to merely ponder the importance of our singular lives, but to reach out and drive back the shadows of our own self-deceit. 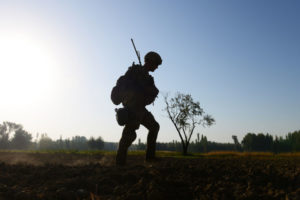 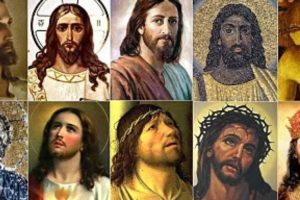 There Is No True Christian

With any socio-cultural change there comes along for the ride[...] 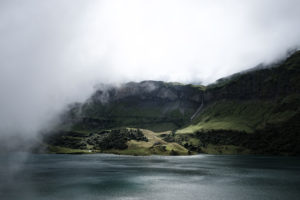 Often it seems that the internet is where good dialogue[...]